An historical picture of the Verde River Bridge. 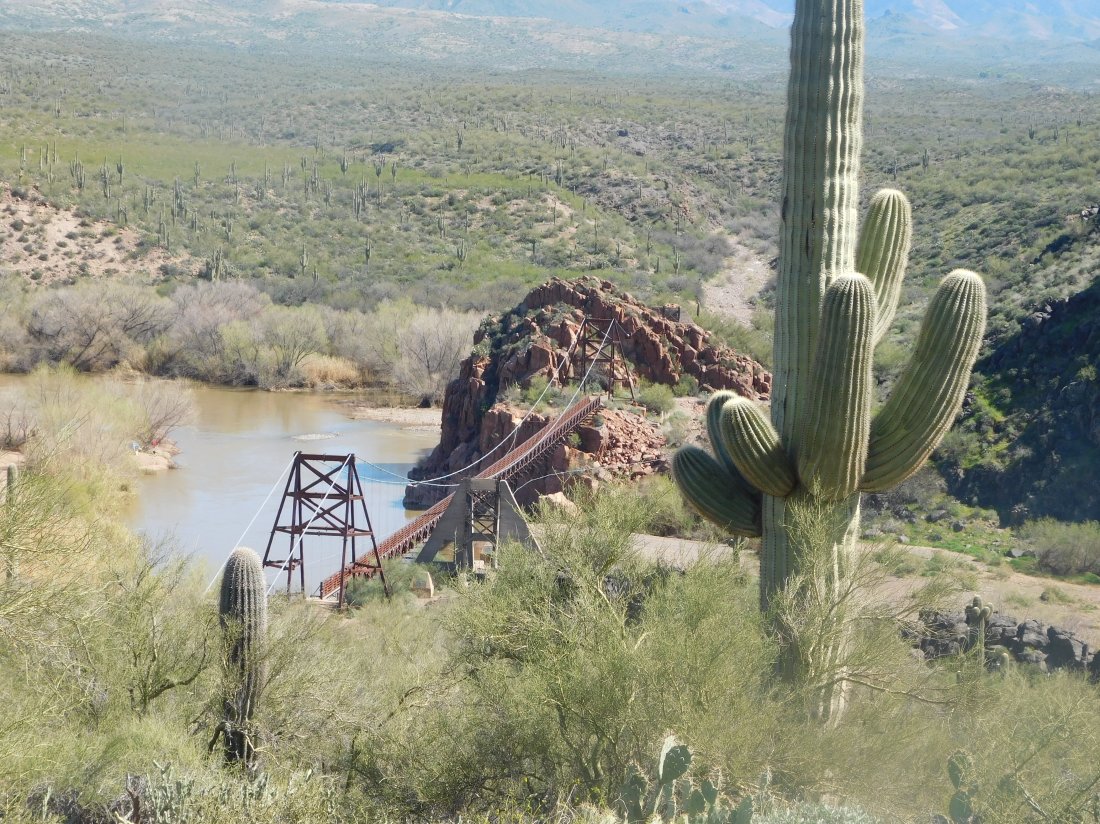 Picture of the Verde River Bridge that was rebuilt in the 1980s.  The bridge became unsafe due to the number of wooden pieces stolen for campers to use for firewood.  This picture was taken January 2017.

I was talking with a friend, Ken, today who said he had a picture of the old Verde River Sheep Bridge he took when he and his dad visited it many years ago.  This would have been the original bridge and not the one that can be visited today (see picture above).  He has a picture, which he needs to find and send me, of a Gila Monster crossing the bridge while they were there.  Ken thought that the bridge had been built in the late 1800s but that is not the case.  Here is part of the story of the bridge.

Frank Auza worked for the Flagstaff Sheep Company owned by Dr. Raymond.  Dr. Raymond had applied to the Tonto National Forest for permission to build the bridge along his trail allotment.  Different sheep companies had assigned trail rights along one of the many designated livestock trails in Arizona.  At one time, there were 66 in Arizona and about this time in the early 1940s, there may have been about 12 trails left. (I’ll write more about this in another blog).  Auza and the other sheep men would cross their sheep along the river which during normal flow, the sheep would cross.  During high water, it was too dangerous for the sheep, donkeys and the men to try to cross the waters.  Many sheep were lost when the men would try to cross the river as the sheep could be easily sweep down the fast moving stream.  Which led to the construction of the bridge.

During WWII, any construction material to build bridges had to be approved by the War Department.  After savaging as much of the material that Frank and the other men could from abandoned mines, they applied to the War Department for the remaining materials.  They were granted permission to buy the materials and the bridge was built.  During WWII, the soldier’s uniform was made from wool and the soldier ate a great deal of mutton.  It was in the best interest of the War Department to insure the survival of as many of the sheep as possible.  There was a movement to have children belong to organizations to raise sheep as it took twenty sheep to supply all the wool needed to clothe one soldier.

This is just a summary of the main events to building the bridge.  I’ll include more pictures in the days ahead.  I have collected more stories over the past couple of weeks and will post as time allows.