Looking through the Williams News for 1916, I have found a few tidbits of information on the sheep industry.  In July 1916 newspaper, there is an article about the Bly Brothers of William having bought out the holding of the Taylor Sheep Company, its water locations, range rights, tanks, rolling stock and pack outfits along with about 4,000 head of sheep.  Newt Arnold was the owner of the Taylor Sheep Company and he sold his ranch to the Bly Brothers and moved with his family to Los Angeles where they will remain for at least two months.  There was no follow-up in later additions as whether the Arnold’s returned to Williams.

There was also a lengthy article about dipping sheep to prevent sheep scab.  Scab was one of the drawbacks to anyone interested in getting into the sheep business but it can be easily controlled with dipping.  The cost to dip a sheep was between 2 to 3 1/2 cents per sheep with labor, fuel and the material for dipping the only cost to the owner.  It has been recommended that sheep should be dipped at least once a year.  Because so many sheep owners had been dipping their sheep, that from 1906 to 1916, there has been a reduction in this disease.  The article continued stating that even though it looked good for the reduction in the disease, sheep owners should not relax this practice and bring back scabs to the sheep. Dipping solutions that were more than ten days old frequently lose their effectiveness and needed to be checked to guarantee that the scab was prevented. The disease was highly contagious and the sheep spread it in a number of ways: infected roads that they crossed, on old bed grounds (where they rest), in sheds, on trails, and in pastures and ranges near to water places and the ground around water places.  During dry seasons, the disease remained dormant and thus many herders and sheep owner thought that the danger had passed. With the return of cold, rainy weather, the disease reappears.

Early newspapers seemed to carry many such articles to educate the sheep and cattle owners on caring for their livestock.  Some issues seemed to be dedicated to the topic of farming and ranching.  One article even had plans for barns and the best use of the area in a barn to economize the area. 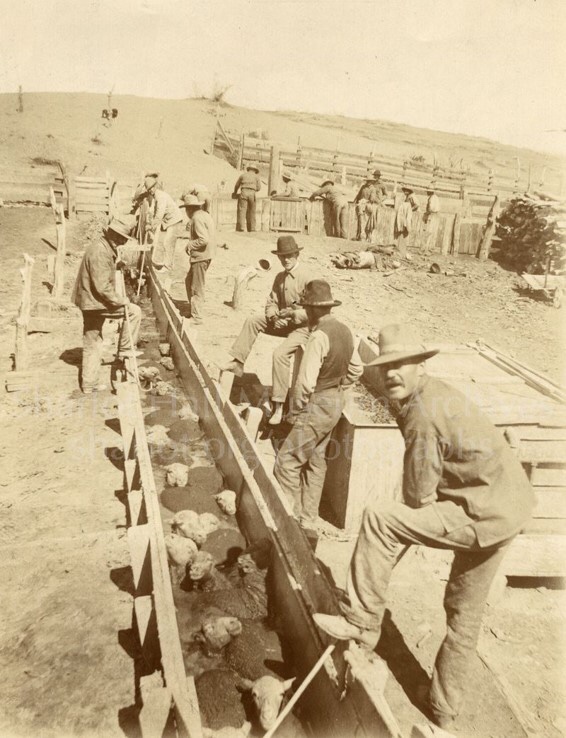