As I have ben researching the Williams News for the year 1903 I was fortunate that January 10, 1903 listed 71 men and women involved in the Arizona Wool Growers Association.  I will list them at a later time.  The first three months of the year, the weekly newspaper, The Williams News, had quite a few mentions of the sheep industry.  Here are just a few of them:

Gus Reimer, who was called the jolly, elderly, ex-sheepman was now part of the San Bernardino Packing Company.  He was in charge of 2,000 sheep that were consigned to him as they were purchased from Frank Ebert.  Frank Ebert was not on the list as being a member of the Arizona Wool Growers Association.

James Walsh had sold all his sheep and was stocking his ranch north of Peach Springs with a high grade Hereford Cattle.

T.J. Evans, was on his way to Ash Fork with a large band of sheep belonging to the firm of Smith and Evans and would take them to the southern country for the rest of the winter.  This was in Local News for February 7th.  It seems late to be trailing sheep south.

Anyone who wanted to get their sheep sheared in the Salt River Valley this spring may find that unless the wool growers agreed to an increase in pay for the shearers, they may not get them sheared.  The current rate was five cents per sheep.  The shearers wanted a penny raise.

Also in February, the paper reported that one of  the largest sheep deals consummated in Arizona in recent yeas was closed in Phoenix. Ambrosio Candelaria sold his entire flock of sheep to the Ortega Bros. for $16,000. The sheep are in the Salt Valley waiting to be sheared.

Sometimes a name was printed with the news that the person was in town for a visit and the newspaper printed their occupation and where they were from.  Chas. Howard was one of these sheep men mentioned and he was from Ash Fork.  Another edition stated that P.H. Goesling, the well-known sheep man from Winslow, had found the bones of a man while hunting for stray sheep.  Nothing else is told about either sheep man, we do know that Howard was a member of the Arizona Wool Growers Association as his name appears on the list.  Goesling was not a member in 1903 which seems strange since he was a “well-known” sheep raiser.

Two pieces of information in the news concerned the wool.  “Wool is now being bargained for in Arizona from a quarter to one third more than it was sold for last season.  When the quantity is taken into consideration, this increase means the disbursement of a large amount of extra money throughout the territory.”  This news was followed a week later that the Williams News printed from The Gazette which stated that “$200,000 worth of wool has been clipped in the Salt River Valley this season.  The amount which passed through Phoenix warehouses is 1,200,000 pounds with about 100,000 more to ship.  The price of the wool shipped has ranged up to 16 cents a pound.  The wool was sacked this year but previous years it was baled.  The average weight of a sack of wool is 200 pounds.

Two last pieces of information stated there were about 35,000 sheep in the neighborhood of Seligman and permits had been granted for the grazing of 100,000 head of sheep on the San Francisco forest reserve for the upcoming season.  And that is the first four months of 1903.  I will add the list of members of the AWGA tomorrow.  And a couple of  sheep pictures with a pack donkey. 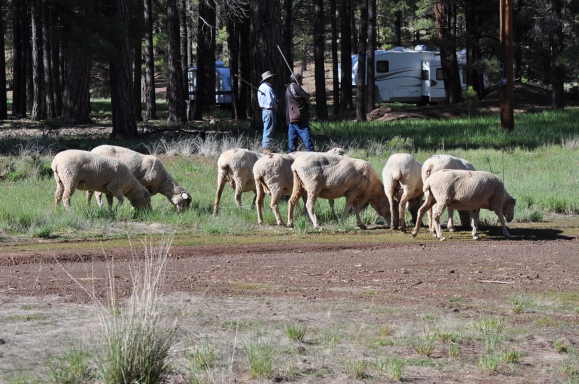