I often look at the ads in the early newspapers to see what items are selling as I am curious if lamb’s meat was a regular item available in these grocery stores. Most often mutton is listed with at least one grocery store. But what caught my eye this time was the fashion show that the Babbitts were putting on. No expense was overlooked it seemed from the advertisement as music, dancing and entertainment was to be a highlight of the fashion show. The show would have all the latest women and men’s fashions from head to foot. However, the ad did not mention that any of the garments were made from wool! But continuing looking through other ads in the newspaper I found that woolen goods were considered a good investment back 100 years ago and were much in style for both men and women.
One ad for March 1919 was for Easter Suits. W. H. Allison, the service tailor, was agent for Victor Ladies Tailoring Co., Chicago. His ad begins recognizing the value of good clothes and that the price in the beginning may be high, but at the same time, those clothes will last a longer time and be in fashion longer than other clothes. His ad listed styles in women’s and misses’ high-class suits, coats, dresses, skirts, waists, and petticoats as ready to wear and made to measure of the finest all-wool grades. I have added the ad from the March 21, 1919 newspaper which I retrieved from https://azmemory.azlibrary.gov/digital/collection/sn82015761/id5568/rec/892 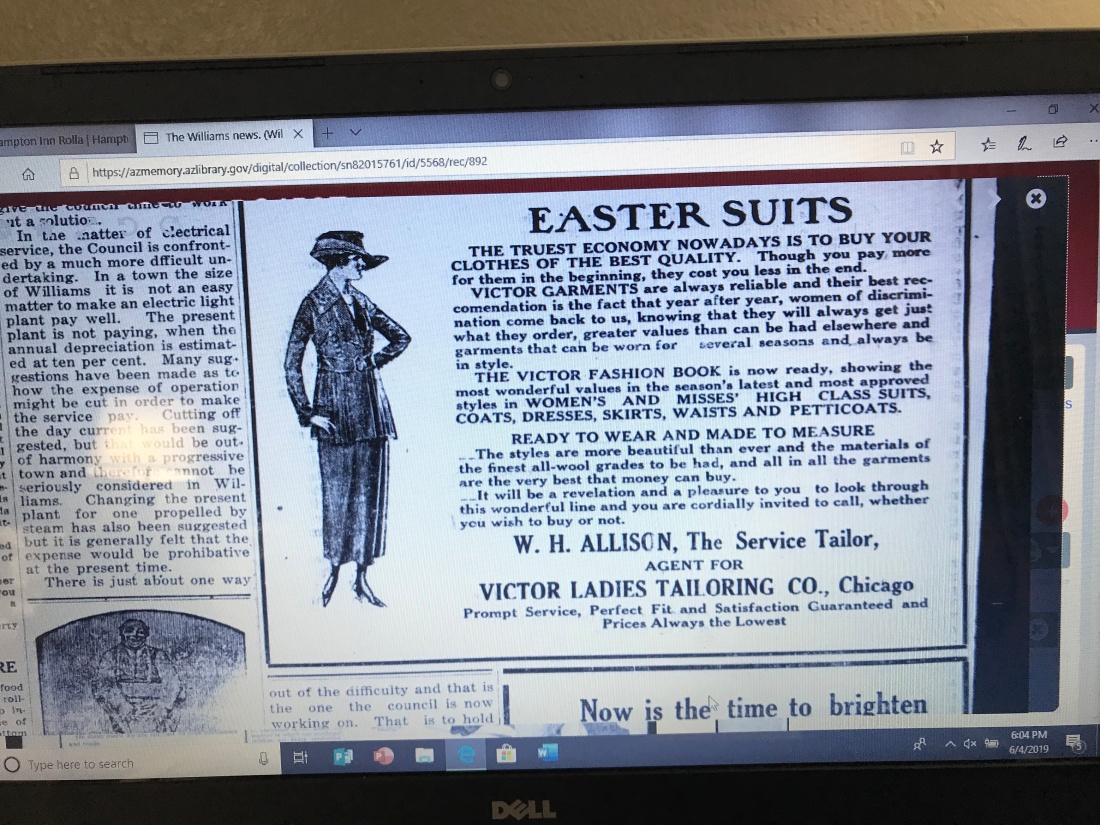 W.C. Rittenhouse also had an ad in the same newspaper which stated “a wealth of exclusive, serviceable patterns in Spring and Summer woolens are offered” at his store to be “tailored to order, costing no more than the other kind.”

Babbitt-Polson Co. placed an ad in the April newspaper (April 4, 1919) for men’s “waist-seam suits” that were either “single or double-breasted variations, slanting pockets, crescent pockets, slash pockets, cuffs, piping on the collar and cuffs” made by Hart Schaffner and Marx of all wool. Later in May, another ad with more details about the Hart Schaffner & Marx all-wool suits was placed stating that the suits were “Special Prices for Peace-time” at $37.50.  Wow!  What a bargain; can’t find a woolen shirt at that price today let alone a complete suit!

Now, I must find who produced the woolens.  It is reasonable to assume that the wool was a product of the United States as there were many woolen mills and millions of sheep in the early 1920s in the United States.